Gabby Douglas is once again flying the flag for #BlackGirlMagic she is a shinning example of her own individual excellence and inspiration to all Black women trying to achieve ‘unexpected’ success. Like Serena Williams she entered a sport that wasn’t synonymous with Black athletes let alone Black champions. But despite her Gold medals and countless successes, some Black people on social media have found it necessary to try to put clouds over her shinning light and stardom.

The negative comments Gabby Douglas has received show 3 trends that some (far too many) Black people need to work on:

Hypocrisy On Racism
Let us keep it real, each week Huffington Post Black Voices clickbaits Black people on some story of a Black Woman’s hair style being a barrier for her in the work place. Subsequently, the comment sections will be filled with Black commentators speaking on racism, white supremacy and Eurocentric beauty standards the media force upon Black women. 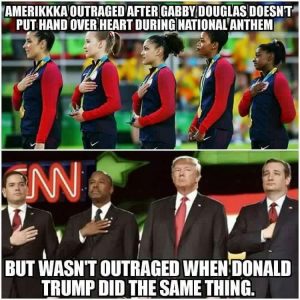 Yet, who are the people criticizing our Young sister Miss Douglas? Are they not her fellow brothers and sisters? Her fellow melaninated people? Yes they are! So, on one day you will call out someone of another race using our natural hair as a tool to oppress us. On the other hand, the following day you will do the samething to your own people. Shamefully ridiculing a young sister, whom already has to take on angry patriots and racists who think she owes them a pledge of allegiance. So, instead of supporting her protest for our issues & instead of letting her know we at least have her back; instead you decided to attack her.

Hypocrisy On Judgment On Men vs Women

From the NBA to NFL you will see a whole array of Black male hairstyles. A fair few wouldn’t stand up to the Black hair police that have attacked Miss Douglas on social media. However, they are noticeable silent when it comes to Black sportsman’s hair. Ok, you might hear the odd comment about Lebron’s receding hairline. However, that is not on the level of the Gabby Douglas shaming tweets.
Why is it a Black man can have whatever hairstyle he likes and not be treated with the same condemnation Black women receive from their own people?

My point is we shouldn’t be judging either sex on their appearance when their primary goal is performance not ‘beauty. Some people’s current judgments are only promoting a negative message to our children. Telling them, especially young women that they will always be judged by how they look not what they can do.

The Ignorance Of Choosing Style Over Substance 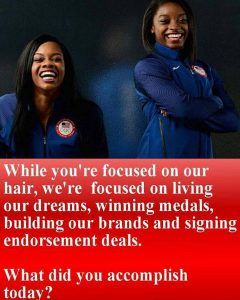 Terez Baskin used her wide social media influence to write an article on why we should care about Miss Douglas’s Hair. In short, Baskin argued that Black girls may have trouble admiring Douglas because her hair wasn’t ‘did’ and it was a reflection of her poor self-care.

I asked Black girls, no Black parents are some of you raising your children to be so superficial? To be fixated on style and ignorant of substance? Imagine if people had said “I can’t study, admire, follow and be inspired by Albert Einstein… But why? His hair is just so messy!”
Have we stopped to think that maybe it is us imposing unrealistic beauty standards on ourselves from time to time? I am sure there are plenty of people whom could have been leaders, speakers, politicians or public figures. However, they have seen the negative statements made about people’s appearances and thought to themselves “I don’t need that judgment and stress”. Subsequently, robbing society of greatness simply because there are those from our community who value style over substance.

What is truly sad?

The truly saddening thing about how some people have decided to speak about Miss Douglas is the example we are giving to our young people. We are telling them that no matter their achievement, no matter how great their performance, how they looked whilst doing it will have precedency over the achievement it’s self.
Gabby Douglas only goal in Rio was to perform to the best of her ability and try to bring home the gold. Just as most of us lead lives where our appearance isn’t the foremost factor in our success or achievements.

Yet, in our style conscious and sometimes narcissistic society, there will be those whom focus on appearance and style to the detriment of their substance and success. There will be young sister’s whom may choose the safety and security of a weave or relaxer as to not receive the ridicule and judgment from classmates and social media.

There was a time when brief moment’s of judgment were left to comedian’s in stand up routines. However, with the advent of social media, too many people whom struggle to fill 140 characters, have proclaimed themselves social media comedian’s. They are willing to throw their sisters under the bus simply for retweets, likes and shares. They post thoughts and tweets that should have stayed in their narrow-minded head.

This probably isn’t exclusive to Black people. However, if your own people won’t stand up for you, why should you be asked to be a roll model for them? Why should you choose put your own financial and commercial success at risk in order to highlight the issues that affect your people? If we carry on pulling our celebrities down for such trivial and inconsequential things such as hair strands slightly out of place, then we will see fewer of them willing to speak up and out for us.

So instead of tweeting, write statuses or blog posts about Miss Douglas’s hair why not support her protest or simply celebrate her achievements!

Miss Douglass like Malia Obama has fallen victim to the people on social media whom forgot the life lesson of ‘minding their own business’.

Do you think the Black community has its priorities mixed up?
Do you think people were right to judge Miss Douglass’s hair?
Please comment below and share; challenge someone to think a little deeper 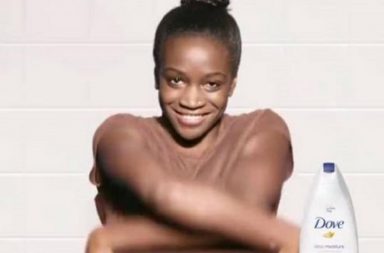