Black Man Shot By White Cop in Traffic Stop As He Reaches for His Wallet: Cop Fired & Pleads Guilty

A White South Carolina police officer entered a guilty plea, for an incident that saw him shoot an unarmed Black man 4 times during a traffic stop. 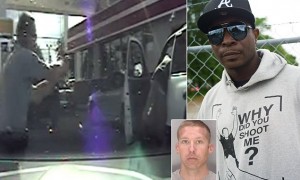 The officer asked the unarmed man to provide his license and registration. The man is seen reaching back into his car as to comply with the officers request. At this point the unarmed Black man is subsequently shot four times. The incident was filmed on the officer’s dash cam and can be seen above.

Huffington post reports that ‘Sean Groubert, 32, could be sentenced to 20 years in prison for assault and battery of a high and aggravated nature. He fired multiple shots at Levar Jones and struck him once in the hip at a gas station in 2014.’

Although, this is an ongoing case it is interesting for many reason.

‘Young black men were nine times more likely than other Americans to be killed by police officers in 2015, according to the findings of a Guardian study that recorded a final tally of 1,134 deaths at the hands of law enforcement officers this year.’ Guardian

Do you think this officer choice to shoot an unarmed Black man was racial motivated or merely poor training/ the poor choice of a fearful officer?

What are your thoughts on the cases that are more clear-cut than this?
Please comment below and share this video to challenge someone to think a little deeper.